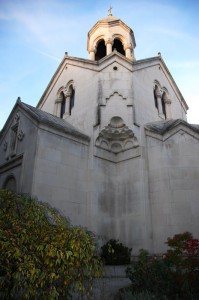 The growth of the Armenian community in London (having been concentrated in Manchester previously) led to the need for a dedicated church. A meeting led by their spiritual leader, Dr Abel Abrahamian, resulted in the purchase of this site. The oil magnate Calouste Gulbenkian advanced funds for building, on the condition that the church was dedicated to the memory of his parents, that it was designed in a traditional Armenian style, and that a board of trustees be established to run its affairs. The unusual choice of architects may also have been Gulbenkian’s idea. The decoration of the church was undertaken by Paul Turpin. The church is closely modelled on the bell-tower of the monastery of St Haghpat in Armenia. Construction was undertaken by Holloway Bros., and the church was opened in January 1923, at which time the neighbouring vicarage was built. An apsidal baptistery on the north side and a new entrance were added in 1937, and in 1950 a sacristy was added; Mew’s & Davis continued to be the architects to the church. The church is a very rare instance in England of an Armenian church, which is of added interest because of its architects. The exterior is highly unusual, and the interior is finely appointed.